People are like: "How up to date is it?"
Answer: No map fixed long enough on paper to study is going to be up to date with Nuevo Vallarta these days. I haven't thoroughly gotten a Jeep dirty and checked out the whole place since at least 2019.
It does not have the Cirque du Soleil complex fully drawn. I does have Chedraui!
I'm not sure I really even have the heart to draw the south shore of the Rio Ameca in the age of Vidanta. But it might be good for someone to know how the landscapes were laid out so that people later in history will have some idea what ruins they are looking at.
One day I will stop trying to update these places altogether, and print lots and lots of commemorative "remember the old times" maps of, say, Yelapa in 2005, and Puerto Vallarta in 2013. Signed, on quality paper, for loving presence in living rooms, on condo hallway walls, maybe in museums.
Nuevo I surveilled in the summer of 2012. I enjoyed exploring it more than I expected. I had a chance to draw it as I researched it because I was living in PV then. The map emerged more or less whole in a few weeks, and I was very satisified with the colors and style - it set the tone for much of what was to come during the rest of the decade, especially as it influenced the Puerto Vallarta Centro's color scheme with its deep green ocean and bright texts.
Just below is the coastal strip between Nuevo proper, the swampy Flamingos territory, and Bucerias at the left: 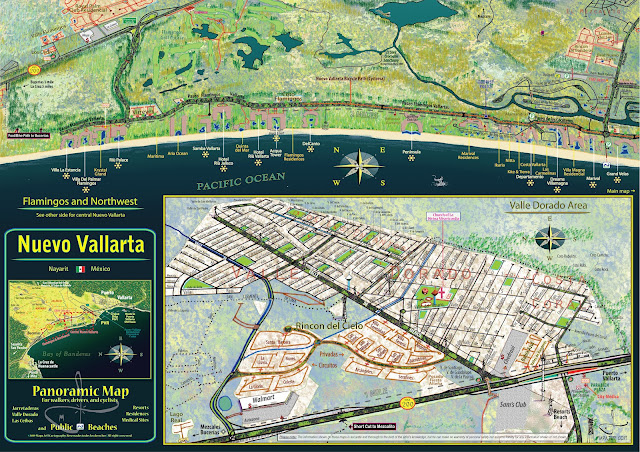 I drove every street in Valle Dorado and found my way into cotos, posing as a gringo. 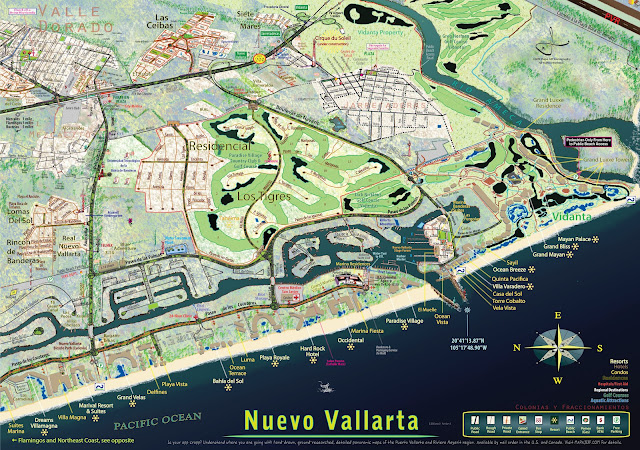 One or two copies in a tube for $25 shipped here.

The 2020 print is circulating in Yelapa for the time being but I have prints updated with 2022 information available to mail-order customers. 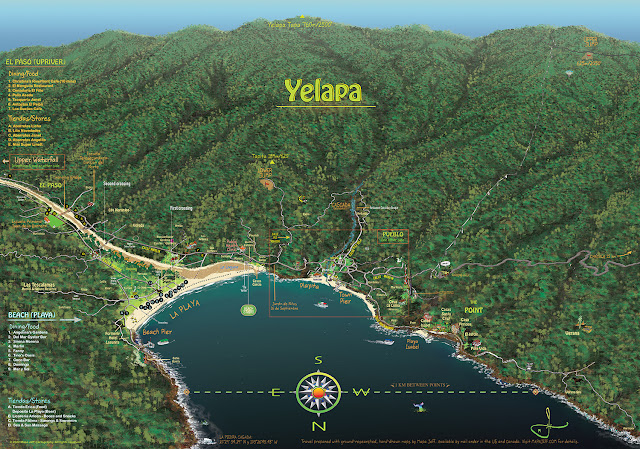 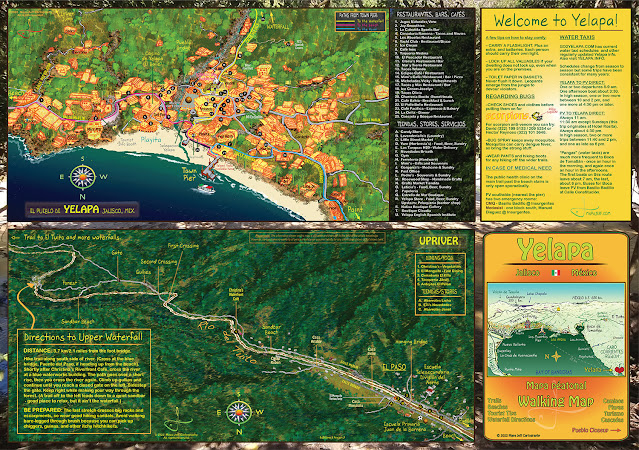 This edition features a new color palette, somewhat lighter than the previous one for better legibility of text. The number of eateries in the Pueblo alone is now up to 25 (!). This print is on the same durable high-quality paper I always use for Stateside mail-order prints. It will also make a nice poster.

Order as a poster here.

Even in this non-starter of a season, I have put out new prints two of my most popular maps: Puerto Vallarta Centro & South Coast, and Cabo Corrientes Roadmap. Since these are small print runs, I decided to experiment with thicker cardstock-type paper. These will be very sturdy maps when folded, and when ordered flat, are tough enough to laminate as placemats. 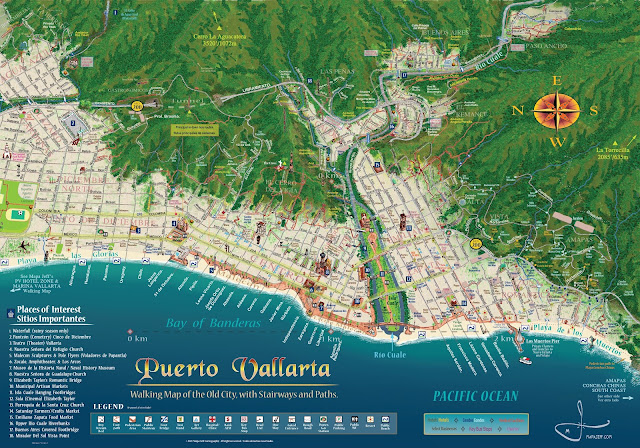 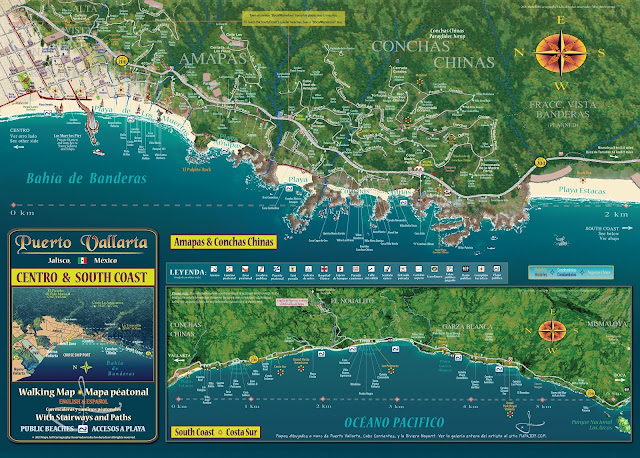 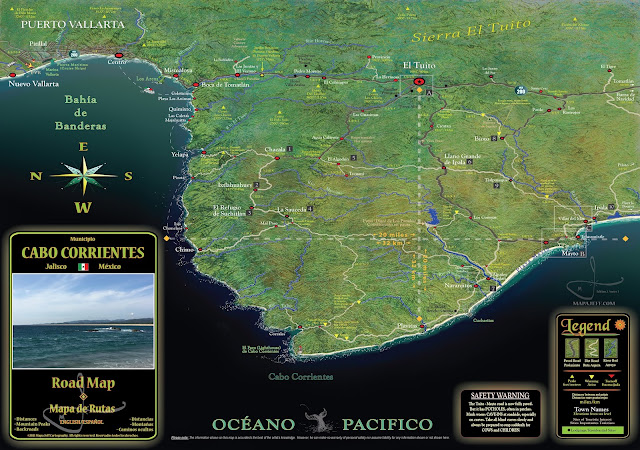 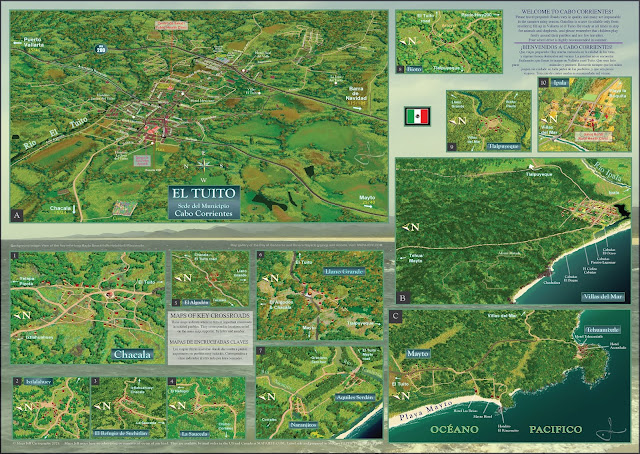 New for 2021: A map for a fast-rebuilding community.

Streets are laid into the folds of hills and creekbeds, and land forms are drawn in relief with shadow, in Mapa Jeff's signature technique. The result is a a unique three-dimensional illustration of the landscape.
Other than ghost graphics for the churches temporarily lacking a facility, this map indicates as little as possible the tragedy of November 8, 2018. All street names from the time before are on this map, aside from a few whose new owners have already decided to take them private.
The first image shows the first edition print, covering Paradise proper, available in stores as of Jan. 27 (for now, Jeannie's Consignment is the sole vendor in Paradise; in Chico, Ellis Reprographics and Art Etc. on First Street downtown also have them).
They can also be ordered shipped or delivered locally at my online store.
The last shows the large version, which shows the region all the way to Mount Shasta. This can be custom-ordered mounted and framed. 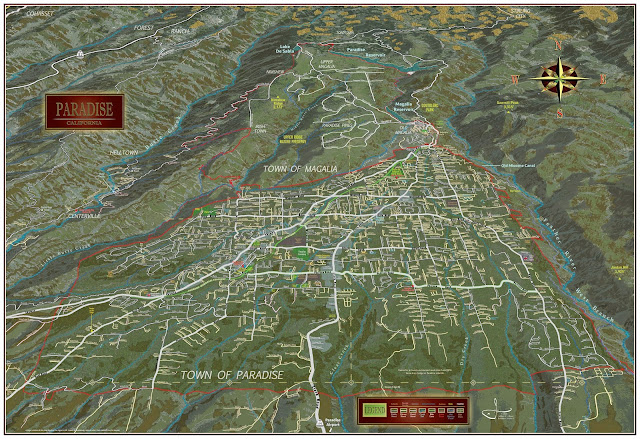 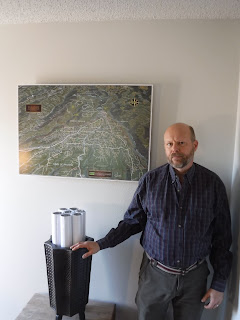 Easy to read - easy to retail.
Posted by Mapa Jeff No comments:

Edition 2 of the Chico Panoramic Map focuses in on the city core for a smaller (2x3-foot), more affordable ($25) poster with more legible type. It is available so far at Made In Chico, Ellis Reprographics, and MONCA. Order the new Chico map at Mapa Jeff's online store. 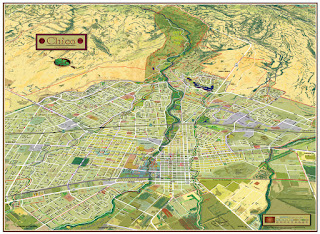 Edition 1, first released in May 2019, proved uneconomical this time around due to a more than doubling of the cost for prints of that size at Mapa Jeff's usual vendor. There are still a half-dozen of these left ($50 each), and two mounted and wall-ready prints that were used as displays at Made in Chico are also for sale ($200 each). 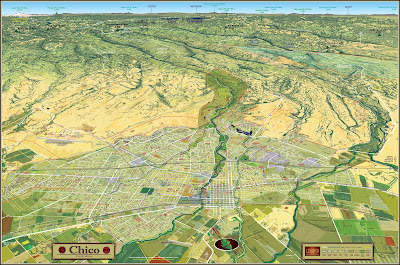 Mapa Jeff originally designed the full-region version in Edition 1 to be printed five feet wide, but shrank the image to make it feasible to print at quantity. Going forward, this full-region map will be available at that size, mounted to foamcore and ready to hang with a frame/brace backing, signed and delivered locally, for $300. Contact Mapa Jeff at mapajeff@hotmail.com for details.
Order the new Chico map at Mapa Jeff's online store.
Posted by Mapa Jeff No comments: 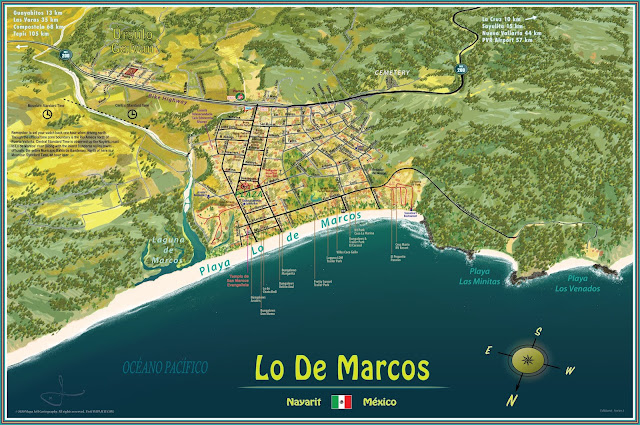 A panoramic, isometric, ground-researched map of the increasingly popular town north of Sayulita and San Pancho. Many streets are unnoted on any other map, including those of neighboring pueblo Ursulo Galvan.

Lo De Marcos is available by mail order in the US and Canada.
The first print is a signed 14 by 20 inch one-sided poster.
It will look great in a frame or on a fridge.
Comes in a tube. 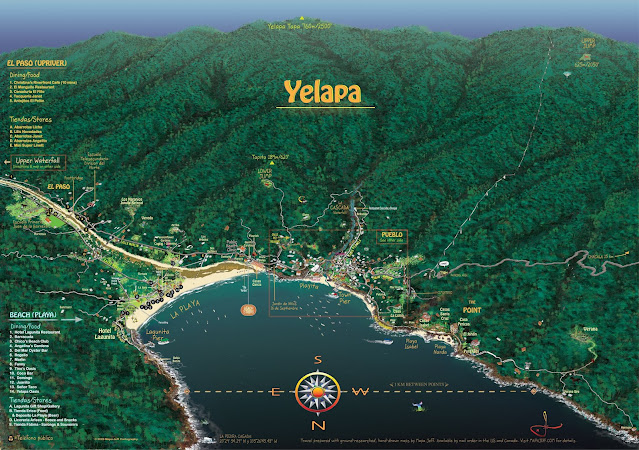 This print, research on a visit in early 2020, recorded the new beach lines in the wake of Storm Narda. It is the first edition with the jungle tree cover in place across the range of Yelapa's gorgeous mountains.
This print is and will be available as a keepsake in Yelapa, both folded and as a poster, for years. The printer, in Leon, Mexico, was unable to stop the machine apparently and bargained with me for a thousand prints. Most sat in a friend's cafe's loo in PV for the entire covid period, side by side with paper towels and napkins.
Order this map for delivery in the US and Canada through Mapa Jeff's online store. 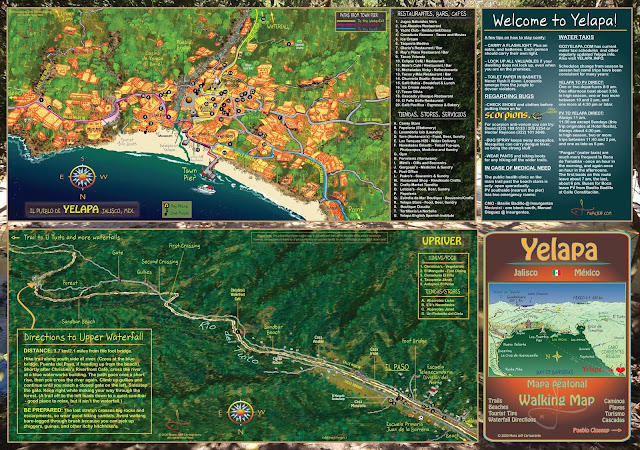 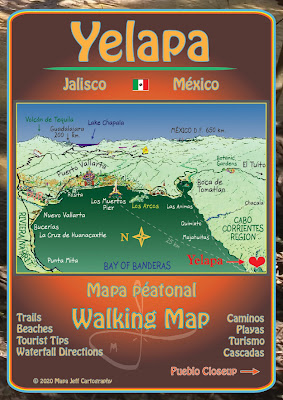 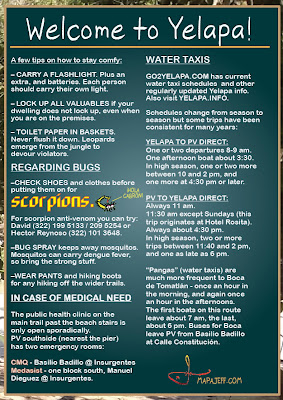 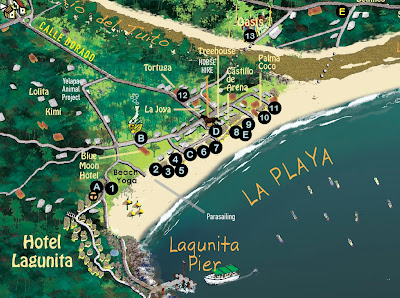 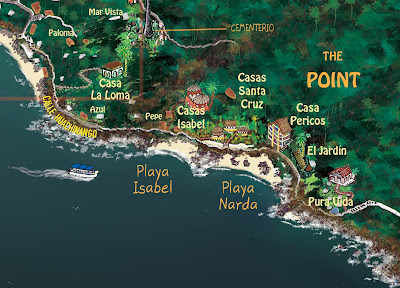 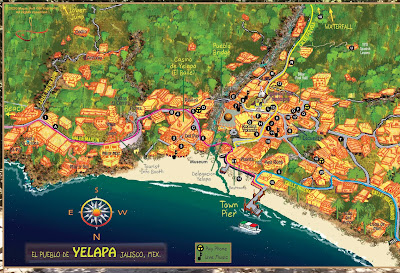 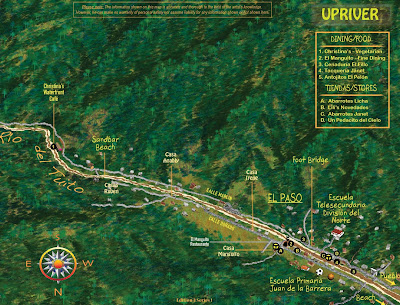 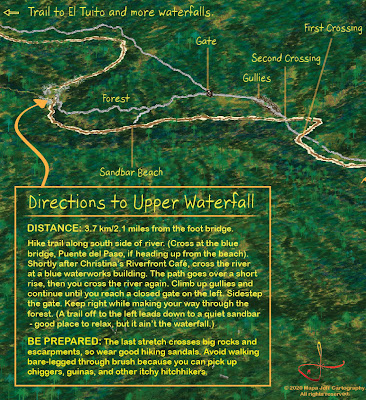 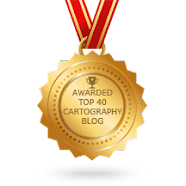